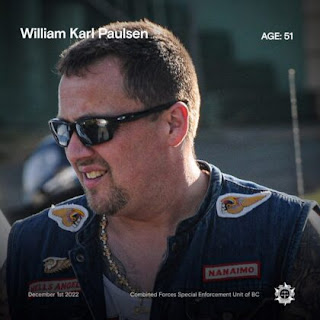 Victoria News is rpeoritng that "Four alleged drug traffickers with ties to the Hells Angels on Vancouver Island are facing charges following a four-year joint law enforcement operation. The Combined Forces Special Enforcement Unit of B.C. held a press conference Thursday, Dec. 1, to announce the charges, which came as a result of the joint operation with the RCMP’s federal serious organized crime unit."

That explains it. I was going to ask who the hell purged the CFSEU but it says it was a joint operation with the RCMP federal serious organized crime unit. Looks like the Federal agency is holding their hand and forcing them to do their job just like with the recent bust in the DTES. This is really good because even Bob Paulson admitted in his exit interview he personally cut funding for organized crime investigation to investigate and instigate bogus terrorist threats. To see the RCMP devote resources to investigate organized crime federally is awesome.

The article states that "The special enforcement unit said the investigation targeted “the criminal networks of members of the Hells Angels Motorcycle Club in Nanaimo and their support clubs, the Savages MC and Devils Army MC and their alleged drug trafficking operation on Vancouver Island.” CFSEU said the seized drugs included 7.75kg of cocaine, 4kg of cannabis, 1.9kg of methamphetamine, 248 oxycodone pills, and more."

"The men facing various charges include Kristopher Stephen Smith, 44, of Nanaimo; Sean Oliver Douglas Kendall, 44, from Port Alberni; William Bradley Thompson, 58, from Ladysmith; and William Karl Paulsen, 51, from Campbell River. Thompson has been arrested and released on a promise to appear in court. Arrest warrants have been issued for Smith, Paulsen, and Kendall."

Victoria News is reporting that William Paulsen is from Campbell River but the Indo Canadian Voice posted a picture of him in colours as a full patch member of the Nanaimo Hells Angels. The article also mentioned the Savages MC and Devils Army MC. The Devils Army as a support club for the Hells Angels. Richard Ernest Alexander, the former president of the Devils Army was accused of shooting 30-year-old Saanich man John Dillon Brown in the back of the head on March 11, 2016 in the Devils Army’s Campbell River clubhouse.

His trial started April 2021 but shortly thereafter resulted in a mistrial and the reasons for the mistrial are covered by a publication ban. AYFKM? One guy beat up a crew of Devil's Rejects in the Voodoo Lounge so Priscilla capped him in their clubhouse. Did they give Priscilla her pink gun back or was that seized under the proceeds of bad taste? Wasn't she in that competition Justin Trudeau recently judged? Maybe we need a new judge.

OK so what about Shakerz in Surrey? When ya'll gonna take care of that?