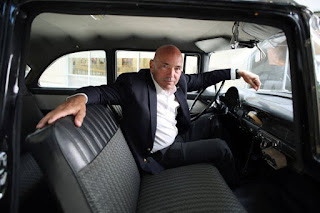 The Globe and Mail is reporting that Bob Paulson is heading for the exit gates saying that organized crime is the biggest threat facing Canadians. He even names the Hells Angels. Now I'm not going to mention the failure of dealing with sexual harassment in the RCMP while he was at the helm. I'm not even going to mention the Dianne Rock story. Much. He retires on Friday.

I am going to mention the fact that the article points out that Paulson "acknowledged the possibility of Islamic State-inspired attacks is now an ever-present reality in Canada, he said such national security risks are significantly less of a threat than organized crime." No kidding.

"Without being a fear monger, we've got to have political leaders understand what organized crime is, how [the perpetrators] get their advantage, how they corrupt individuals and institutions, how they get their hooks into people." Indeed. The Surrey RCMP are providing the Hells Angels drug dealers on the Surrey strip police protection. Something needs to be done about that.

Paulson himself is on the record saying he almost depleted the supply of federal detectives specializing in Mafia and biker-gang investigations to national-security squads following the 2014 slayings of Canadian soldiers near Parliament Hill in Ottawa and in Quebec.

Interesting. Bob Paulson admitted that he himself almost depleted the supply of federal detectives specializing in Mafia and biker-gang investigations during his tenure to focus on finding and creating terrorists like in the Surrey Pressure cooker bomb plot. Instead of bribing and threatening drug adicts to blow things up, we could actually use that money to investigate organized crime.

As to who should replace Bob Paulson, at this point I don't know. Putting Bill Fordy in that position would be a crime against humanity. That guy is the weak link in E Division. He's the last of the Friends of Craig Callen fruitcakes causing problems in upper management here. Yet there's nobody strong enough in BC to take on the Commissioner's role.

Dwayne McDonald has been a huge disappointment since he took over for Bill Fordy as Surrey Police Chief. We had high hopes for him since he did such a great job in the Kelowna Summer Jam but he dropped the ball when he came to Surrey. The problem is he just doesn't have any balls. Don't get me wrong, I'm sure there's a place in this world for eunuchs. I just wish he'd grow a pair. Dwayne needs to realize that you cant please a dirty politician without getting dirty.

Justin Trudeau also needs to realize that the best person for the job isn't necessarily a woman. It might be but this gender selection diminishes everyone. I think they should pick someone from Quebec. A strong Frenchman who respects women and respects himself. That would set a good example for the entire force. The sexual harassment problem will now dissipate. Now we need to focus on organized crime. That takes fortitude.