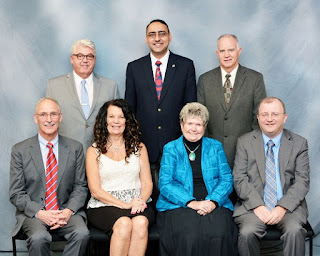 The Peacearch News is reporting that "The Surrey School Board wants Mayor Linda Hepner to address how an elementary school’s playing field is being affected by road construction plans. At its first meeting of this school year, on Sept. 20, the Surrey Board of Education received a report from Superintendent Dr. Jordan Tinney summarizing concerns about the 105 Avenue Connector project’s impacts on Hjorth Road Elementary school."

"The city intends to build a road that would cut through the Guildford school, and an LRT station is planned next to the school. In his report, Tinney notes the crucial need and community desire for transit improvements but said our priority is the impacts on schools.”

“Hjorth Road Elementary school is central to our community,” writes Tinney. “We realize and appreciate that the creation of a robust transportation system is in the best interest of Surrey, but we need to ensure that our community school remains viable and safe. Having access to a viable play field on-site is essential to the operation of a school.”

Trustee Terry Allen said prior to shovels going in the ground, there needs to be an agreement in place between the city and the board. “The truth of the matter is, for the board of education, if it doesn’t benefit the students, then there will be no deal,” he said. “That’s what we’re elected to do and that’s what we will continue to do.”

This neighbourhood, noted Allen, is one of the city’s lowest income. “These students and Holly Elementary are the most vulnerable students. We’re committed to that school, and we always have been,” he said. “The city can do what it wants with Hawthorne Park but they can’t do what they want with our property.” Allen said while he appreciates parkland, his “fight begins at the fence of Hjorth Road.” “There’s a lot at stake,” he added. “The city needs to know that. I’m not going to lie to you and say that city staff and our staff haven’t spoken. But I want to be very clear that there certainly is no deal between the council and the board of education.”

Linda Hepner is a raging lunatic and Dianne Watts is the driving force behind this insanity. 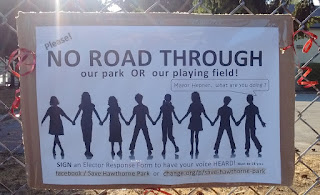