Man shot in Surrey drives himself to the hospital 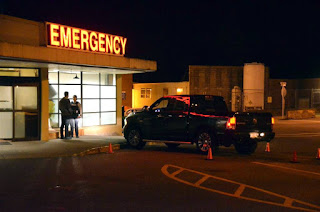 News 1130 is reporting that "RCMP officers had to rush to Peace Arch Hospital in White Rock last night after a man drove himself to the emergency room in a shot-up pickup truck."

The Peacearch News is reporting that "A witness says the man arrived at the hospital in a pick-up truck with at least two bullet holes in the rear driver side door, which was seized by police. The investigation led police to Cloverdale, specifically the 5300-block of 164th Street, where the shooting is believed to have occurred.

Linda Airhead Hepner throws her head in the sand and says gee I don't know what to do guys. It's not my problem. You need to resign. Having the RCMP provide police protection to the Hells Angels drug dealers on the Surrey strip is criminal negligence.