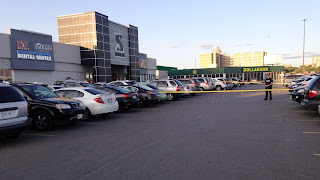 Global is reporting that "A man believed to be in his 20s is dead after a shooting at North York Sheridan Mall in north-end Toronto Thursday afternoon. Toronto police and paramedics were called to the plaza near Jane Street and Wilson Avenue at around 5:20 p.m. with reports of a shooting. A man was found with a gunshot wound inside the mall. He died at the scene."

Shooting someone inside a mall isn't very bright. There are security cameras everywhere. This mall is just south of Woodbridge where all that mob violence tied to the Hells Angels has been going on throughout the summer. Stop the greed, end the violence.