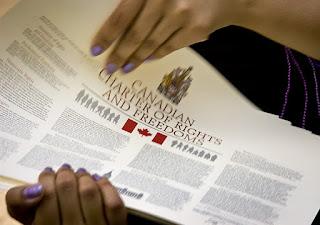 Why would an activist from Surrey support Andrew Wilkinson over Dianne Watts? Wait till I tell ye: Because I am from Surrey. I saw what Dianne Watts did to Surrey and I stand as a witness declaring that it was not good. She was a bully who said one thing and did another. She left us with record debt and an organized crime problem that was never confronted. Andrew Wilkinson on the other hand has potential. He is a former lawyer who has worked with the BC Civil Liberties Union and was a physician before that. I kid you not. The guy is educated.

If anyone can unite the bright in response to the NDP in BC he can. Not with kool aid and hype but with sincerity and competence. BC doesn't need another another photo op spin doctor catering to conflicted lobbyists. BC needs leadership not spin. We need to confront organized crime without removing civl liberty. We need to maintain fiscal responsibility and keep taxes low so business can prosper. We don't need more of Dianne Watts tax and spend insider trading.

David Suzuki speaks at Surrey Rally - Reducing 104th Ave to a single lane is not progress. 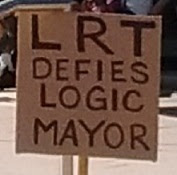 LRT along 104th is a Bad Idea. Dianne Watts is the driving force behind this insanity steamrolling over Hawthorne park and Hjorth Road elementary. As a candidate for the leadership of the BC Liberals Dianne Watts says she wants to lower taxes. Wouldn't that be nice? Unfortunately we all know that Dianne Watts says one thing and does the other.

How is she going to lower taxes when she plans on spending 2.6 billion tax dollars on an on ground railway we don't want or need? The NDP just lowered taxes by removing tolls on the Port Mann bridge. As a result traffic flow changed and we don't need a replacement for the Alex Fraser Bridge and Dease Island tunnel. In so doing the NDP just saved taxpayers an additional 2.5 billion tax dollars through fiscal restraint.

When Dianne Watts was mayor of Surrey she loved spending tax dollars and left us with a record debt. When she was a member of the mayors glutton's council she was obsessed with finding new ways to raise taxes and spend money. She wanted to toll every bridge under the sun and impose a regional sales tax above and beyond the 10 cents a litre billion dollars a year regional gas tax. Even after the HST and the Translink tax hike referendum failed.

Years ago Preston Manning lead a Canadian Ron Paul revolution targeting fiscal responsibility that completely swept through the West. It was rebelling against Lyin Brian Mulroney's tax and spend pork barrel politics. Sadly Eastern Canada saw the reform party as a separatist movement and never bought into it. Instead of giving it time to sink in on the East Stephen Harper merged with Mulronism just to get elected.

Harper merged with the same entity the reform party was created to confront. Dianne Watts is not fiscally responsible. She is part of the same tax and spend pork barrel politics Brian Mulroney and Stephen Harper were part of. That is not something I can endorse.

As far as dealing with organized crime in British Columbia there is not a snowball's chance in hell Dianne Watts is going to do anything about it. She promised us the world when she ran for mayor of Surrey with regards to transparency and crime reduction. When she got elected she did the exact opposite. Over and over again citizens would report drug trafficking in front of businesses in Newton, trailer parks as well as numerous other concerns and each time the complaints fell on deaf ears. City hall and the police did nothing. Dianne Watts blew the whole policing budget going after grow ops and didn't lift a finger to confront crack dealing.

So I am simply recording my dissent. I'll sit this gluttons gallery out and just say you heard it here first. When everything I warned you about repeats itself I will simply say I told you so. Don't look at me, I voted for the other guy. Andrew Wilkinson is the better choice. Go Godzilla. 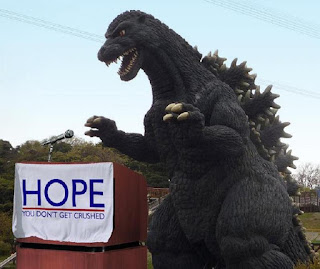