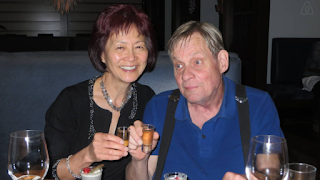 Global is reporting that "Vancouver police have identified the couple killed in a Marpole home on Wednesday. Police said 65-year-old Dianna Mah-Jones and 68-year-old Richard Jones, a married Vancouver couple, were killed at the home near West 64th Avenue and Hudson Street."

CBC is reporting that the police say There is nothing so far to suggest this was anything but a random crime. Previously the Vancouver Province reported that a vehicle missing from the home was located. The police did not believe it was a murder-suicide.