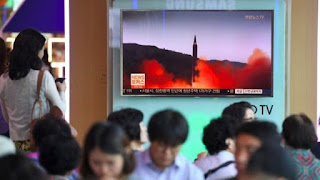 The Guardian is reporting that North Korea has launched another missile over Japan, a day after it threatened to sink the country and turn the US into ashes and darkness." The president of South Korea oposes the presence of nuclar weapons in it's country which makes sense.

South Korea, Japan, Canada and Guam need an Iron Dome missle defense system. Like I said, Kim Jong-un is a terrorist supported by China. China is not neutral. They are the driving force behind this insanity. BC and Alberta need to take back their oil rights from Communist China.