Another earthquake in Mexico 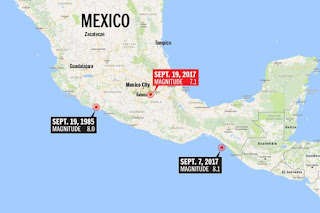 The New York times is reporting that A powerful earthquake struck Mexico on Tuesday afternoon, toppling buildings, rattling the capital and sending people flooding into the streets for the second time in just two weeks. By night, nearly 140 people had been reported killed across the country, including scores in the state of Morelos, close to the epicenter of the quake, and dozens here in the capital, Mexico City. But the figure was expected to climb, especially because rescuers were still frantically digging out people trapped beneath mounds of rubble. The earthquake hit shortly after 1 p.m. about 100 miles from Mexico City. It registered a preliminary magnitude of 7.1, causing heavy and prolonged shaking in the capital." Our condolences.