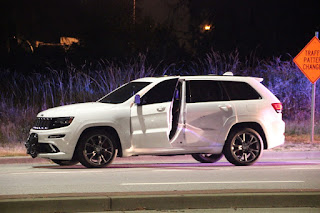 Global is reporting that there was another shooting last night on highway one. "Langley RCMP said the incident happened around 10:30 p.m. Wednesday when the driver of a white Jeep SUV was driving westbound near 192 Street. A police investigation has so far found that shots were fired from a 1994 or 1995 four-door black Acura into the Jeep while both vehicles were travelling westbound on Highway 1 between 200 and 102 streets. The driver of the Jeep was able to drive to the area of 96 Avenue and 176 Street and wait for help before being taken to hospital with non-life threatening injuries. Reports say he was hit in the leg." News 1130 is reporting that "Soon after investigators were able to track down the suspect vehicle."

The Peace arch News is reporting that "The Integrated Homicide Investigation Team is on scene after a dead body was found following a fire in Surrey overnight." The fire was in the 12300-block of 112A Avenue in the Bridgeview area of Surrey just before 1 a.m. Police reported that the male “died under suspicious circumstances and the cause of the fire has also been deemed suspicious. Officers have taken one individual into custody.”

On the lighter side, the Times Colonist is reporting that "A 60-year-old Ladysmith man is recovering from a gunshot wound to his leg after he was hit while playing golf. Nanaimo RCMP said the man was just finishing up a round at about 4:30 p.m., Thursday, Aug. 31, at a Lantzville golf course when he felt a sudden pain in his calf muscle. A group of golfers came to his aid and helped him off the course. The injured man then drove himself home. Later, he visited a Ladysmith hospital where X-rays revealed a bullet lodged in his calf. The bullet was removed and the wound dressed. The injured man is expected to make a full recovery."

"Mounties later fanned out to speak with residents living near the golf course. They had heard reports of sporadic gunshots throughout the afternoon. It’s now believed that the man was hit by an errant shot fired by one or more people practice shooting from an adjacent rural area. Investigators do not believe the wounded man was targeted. However, police strongly cautioned shooting a firearm within 100 metres of any building is illegal. Also, a basic rule of gun safety is to always know the background of one’s shooting area and what lies beyond it." No kidding. Target shooting beside a golf course isn't a very smart thing to do.

Update: Meanwhile back on the ranch, US police tell American gun enthusiasts not to fire guns at hurricanes. If they only had a brain.