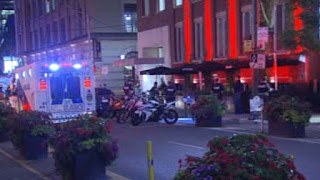 City news is reporting that "Toronto police are investigating a shooting at a downtown restaurant. Police were called to Michael’s steakhouse restaurant on Simcoe Street near Adelaide Street West around 9 p.m. following reports of four to five shots being fired. They say a man was located without vital signs. Paramedics continued to try and revive the victim on the scene before transporting him to a nearby trauma centre, still absent vital signs. The suspect reportedly fled westbound along Pearl Street. He’s described as male wearing a grey or dark hooded top and armed with a handgun. The restaurant was the scene of a targeted shooting almost two years ago when a man and a woman were shot by two masked men."