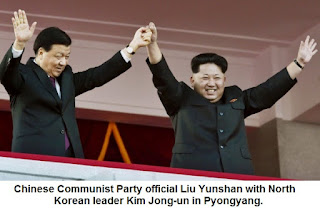 AFP is reporting that "China strongly condemned North Korea's Sunday nuclear test, slamming Pyongyang for ignoring international condemnation of its atomic weapons programme." Can we please put an end to China's compulsive lying because it is really becoming offensive. Actions speak louder than words. Putting a statement on a website stating they condemn North Korea's nuclear test means absolutely nothing when they at the same time oppose sanctions against North Korea and object to South Korea installing an iron dome missile defense system against North Korea's continued terrorist threats.

How can we believe anything China says when they throw Buddhists in jail just for being Buddhists and execute them to order for organ harvesting. Nothing China says has any credibility whatsoever because they are murders and compulsive liars.

Canada needs to stop selling China Canadian nuclear reactors because they use that technology to export nuclear weapons and China are the ones that supply North Korea with military equipment. BC and Alberta need to take back their oil rights from Communist China. It's that simple. It's called a natural consequence of unacceptable behaviour. 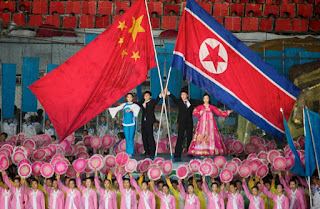 Update: The Canadian Press is reporting that "North Korea illegally exported coal, iron and other commodities worth at least $270 million to China and other countries including India, Malaysia and Sri Lanka in the six-month period ending in early August in violation of U.N. sanctions, U.N. experts say." This is where we need to balance the extremes.

I don't care if North Korea exports coal or iron to China. That is their right. However, it is our right to say we will not buy your products or give you humanitarian aid when you continue to conduct nuclear tests and continue to terrorize the world with defiant missile tests. North Korea needs to be able to feed itself. We dont want to create another Helms Burton fiasco.

If North Korea wants to be Communist then let them be Communist. If they invade another country we will take up arms against them. If they threaten the world with nuclear missiles then we will refuse to buy their products. That is our right and our duty.