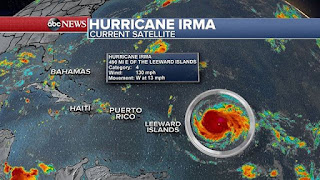 The New York Daily News is reporting that "The American rapper known as Pitbull is sending his private plane to Puerto Rico so that cancer patients can receive treatment in the United States."

The Verge is reporting that "In the wake of Hurricane Maria, Puerto Rico’s 3.4 million American citizens remain almost entirely without electrical power — but it’s not because their power plants are blown. The problem is that roughly 80 percent of transmission lines, which take power from the plants to distribution centers, are down. Nearly all the local power lines that run to residences and businesses have likely also been destroyed."

NBC is reporting that "About 44 percent of the Puerto Rican population remains without drinking water, the Department of Defense said in a statement Wednesday." The Washington Post is reporting that "The Trump administration is rushing military hardware and personnel to Puerto Rico and the Virgin Islands as it becomes increasingly clear that the U.S. government response to Hurricane Maria so far has been inadequate and overmatched by the scale of the disaster."