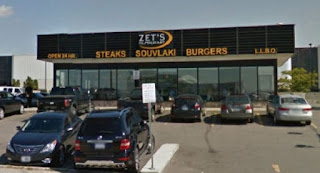 WTF is going on? The Toronto Star is reporting that "An 18-year-old woman is in critical condition after being shot in the face at a popular 24-hour restaurant in Mississauga early Friday morning, police say. Just before 1 a.m., Peel Regional Police were called to Zet’s Restaurant on Airport Rd., near Pearson airport, and found the young woman suffering from gunshot wounds. She was rushed to hospital in what paramedics describe as critical but not life-threatening condition. The restaurant was open at the time. No one else was harmed, but police say there were numerous witnesses in the area and that they are cooperating in the investigation."

Same area as the Mall shooting.