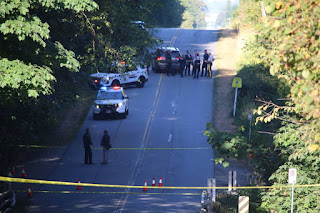 CBC is reporting that "Two people have died after what's believed to be a targeted shooting in Langley, B.C. A man and a woman were found suffering from gunshot wounds on 232 Street near 64 Avenue around 5:30 a.m. PT on Friday, according to RCMP. A statement said both later died of their injuries. It's the third fatal shooting in the Fraser Valley this week: A man was killed in Abbotsford on Thursday and another died after being shot in Surrey two days earlier.

Global is reporting that the shooting actually took place at 62A Crescent and 64 Avenue 5:30 AM this morning. Nearby at 232 Street and 64 Avenue there was a second crime scene. A red Jeep could be seen with both the driver’s door and passenger door wide open and yellow crime scene tape around it. It is believed this could be a suspect vehicle but that has not been confirmed.

The Peacearch News is reporting that "According to Curtis Kreklau of South Fraser News Services, police arrived in the area and quickly located a suspect vehicle – the Jeep – and arrested a man and a woman in a high-risk takedown. A blood trail was observed coming from the victim’s vehicle and a search was conducted for a possible third victim, and a police dog was also searching nearby farmer’s fields, said Kreklau." 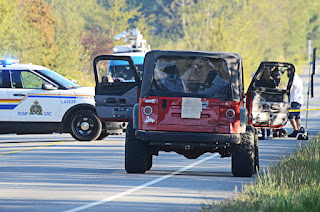 Update: The Peacerch News is reporting that "Brandy Petrie, a 34-year-old Burnaby woman, and Avery Levely-Flescher, 20, of Surrey have been identified as the two people who were shot and killed on a rural road in Langley early Friday morning, Sept. 1. Charged in their killings is 21-year-old Travis MacPhail of Langley."