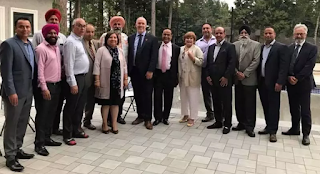 Global is reporting that John Horgan and Linda Hepner were photographed posing with a convicted shooter, former Radio India boss Maninder Gill from a fundraising dinner Wednesday. Gill was sentenced to four years behind bars for a 2010 shooting outside a Surrey temple that left one man injured. In a statement, the BC NDP said the Premier did not know Maninder Gill, nor was he privy to the guest list of the event.

Hepner said Dhesi invited her and the only reason why she went to the dinner was to establish a relationship with the province’s new premier. “I do know Maninder Gill, it was not my intention to be in a photo with him, group or otherwise.”

A word of advice to John Horgan. If you want to protect your political future, stay as far away from Linda Hepner as possible. That woman is dumb as f*ck and is dirty as f*ck. However, since he did attend a function with her we are going to have to ask him, aren't schools in BC protected? Linda Airhead Hepner wants to build a road that is totally unnecessary right through an elementary school playing field. Let's save the school and lose the airhead.