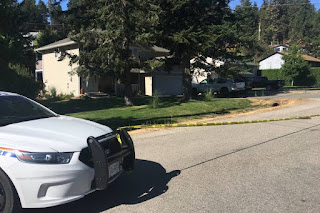 Global is reporting that a yong man who was a a web designer in his mid-to-late 20s was gunned down in a West Kelowna driveway across the street from his parents home around 8:15 p.m. last night. He was visiting them from Vancouver.

The victim had just pulled into his parent’s driveway and was driving a black GMC Yukon before the shooting occurred. A neighbour came out to find two bullet wholes visible in driver's side window and the victim's body slumped over in driver's seat

Update: The Kerameus Review is reporting that "Pennell owned a company called Traphouse Skateboards which was registered to the West Kelowna address on McTaggart Road that police were called to with a report of shots fired. He was found dead in a vehicle in the driveway. In a press release issued hours after the shooting Cpl. Jesse O’Donaghey deemed the death a homicide and said that the victim lived a “high-risk lifestyle” and “was well known to police.”

"In fact, court records show Pennell faced a dozen separate drug trafficking charges and weapon-related charges in 2011. The Prince George Citizen wrote in 2013 that Pennell had been dealing drugs for about a year when he was arrested on charges stemming from that activity."