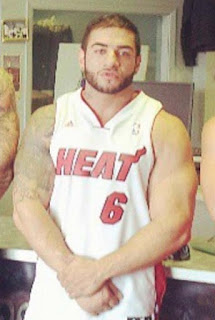 Global is reporting that Konaam Shirzad, one of the founding members of the Red Scorpians, before they were taken over by the swine flu, was shot dead last night in Kamloops. I can tell you the UN didn't do it so do the math.

Konaam was in the news January of this year after the police used percussion grenades to execute a search warrant at the gym he owned. I kid you not. The police didn't find anything which supports my personal theory that he left the life.

Blaze the fly sh*t woman beater claimed Konaam had kicked the Wolf Pack out of Kamloops so that would provide you with a motive. Chalk up one more for the big red machine. Konaam was solid. The cub pack sucks. Money doesn't buy respect yo. Any kid can pull a trigger.