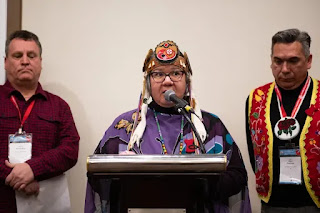 The Counter Signal is reporting that "After some NDP MPs joined the Official Opposition to condemn a Liberal amendment to ban semi-automatic shotguns and rifles used by hunters and farmers, Conservative MP Dane Lloyd said it’s about time.” Pride cometh before the fall.

Even Global News is admitting that "Chiefs at the Assembly of First Nations have voted to publicly reject the Liberal government’s proposed gun-control legislation. An amendment to Bill C-21, which is currently being debated by members of Parliament, aims to create an evergreen definition for assault-style weapons and enshrine it in law, allowing the government to ban hundreds of models of firearms." Including hunting rifles. Like I said, he can't ban hunting.

"Some First Nations leaders say they’re concerned to see rifles used for hunting on the list and voted today to take a stand against the bill, which they say infringes on their treaty rights. The chiefs carried the emergency resolution with unanimous support at a special assembly. Their vote comes as Public Safety Minister Marco Mendicino and Prime Minister Justin Trudeau are set to address the gathering in Ottawa later Thursday." Their bounds are set.