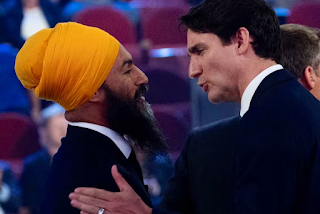 Update: This is the recent ban and this is the new amendment. The amendment will cost billions.

This is an overview of brands and this is the completle 307 page list.

Jagmeet Singh's support for the all inclusive gun grab

Before Jagmeet Singh and Justin Trudeau's honeymoon is over, they have seen the writing on the wall and have gone for one last outrageous power grab before their unholy coalition falls. This last minute amendment banning all kinds of hunting rifles is straight out of the Twilight Zone. It reveals their real agenda. Democide is the leading non-natural cause of death in the 20th century.

We all know that the Communist quest of the World Economic Forum is trying to ban every single type of firearm possible. That is what Communists do before they commence mass murder. Organ harvesting is big business in Communist China. If they have their way, Canada will be next. No, they're not going to start putting the Falun Gong in prison. Yet. Although they're letting the CCP set up police stations in Canada to harass the Falun Gong here, Justin Trudeau and Jagmeet Singh want to put every legal gun owner in jail. That is no secret.

Yesterday I went into the gun store to find out what the legal replacement is for the SKS. They said their isn't one. The last minute amendment bans any semi automatic rifle with a removable magazine. The stock SKS doesn't have a removable magazine. It has an internal magazine. Although it meets the requirement, in addition to that requirement they named the SKS specifically and put it on the ban list. So I said how about the M1 Garand? That has an internal magazine. Nope. They named that one as well and put it on the ban list.

So here's what they've done. They have banned any semi automatic rifle with a detachable magazine and said only rifles with an internal magazine will be permitted. Then they also banned basically the only two semi automatic rifles with internal magazines. Can we all see how this works? They are trying to ban everything because they have an agenda. Protecting public safety is not it. Reducing gun violence is not it. They promote crime to promote their agenda.

So what are our options? CBC mentioned a voluntary buy back program. That is an insane waste of tax dollars. As we know, Justin Trudeau doesn't care. He has absolutely no regard for fiscal responsibility because he wants to bankrupt the country so he can justify his problem, reaction, solution paradigm. The CBC article also states that "Those who keep their blacklisted weapons would have to abide by strict conditions. They would have to agree not to use the weapons, to import or acquire any more of them or to bequeath them to anyone else."

That was my first question. Can't we be grandfathered in? They'd still remove all the guns through attrition but it doesn't burn tax dollars in the process. That would kind of make sense.

I have a friend that teaches firearm safety at the Justice Institute. He has a clause on his firearms licence that grandfathers some of his prohibited firearms. The problem is, he's not allowed to do anything with them. He can't take them out to the bush to shoot and he can't even take them to the gun range to shoot. He is simply allowed to own them as a collector. That's kind of pointless.

I understand the intent of the internal magazine concern. Manually loading five bullets at a time into the magazine is very slow. It's totally impractical for a mass shooting which is fine with me. Everyone wants to prevent mass shootings especially legal gun owners. They put the SKS and the M1 Garand on the ban list because they sound scary. They're 100 year old rifles for f*ck sakes. Justin Trudeau is afraid of his own shadow. He's afraid of a Swiss Army knife.

So what am I going to do? I'm going to buy another gun. One that I can actually use that isn't covered by the new amendment. They did have a couple of lever action Brazilian hardwood rifles that looked cool. They're not semi automatic. They're like a bolt action hunting rifle. You manually load a couple of cartridges into the side then physically pump the lever to eject and reload cartridges. They had one that was chambered in a .357 and another that was chambered in .44.

They looked really cool and fun to shoot. If I had a million dollars I'd buy one of each but I don't. I'm looking for something else and I'm not gong to say what I get because as soon as I mention it, they will add it to the ban list so I'm just going to keep my mouth shut.

Despite the fact that the fragile Justin Trudeau and his new wife Jagmeet Singh want to ban every single firearm that exists, they can't ban hunting. They're not allowed to do that. Their bounds are set. So what do we do? We adjust. What they ban we buy something else. Something we can actually use. As soon as they ban the SKS, that ammo is going to be really hard to get. You want a common caliber so ammo is readily available. In the mean time, get out there and vote. Let's fix this at the ballot box. Change the government, you change the law.