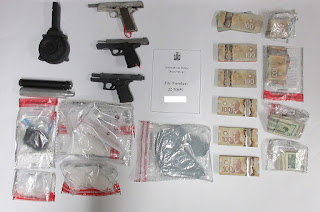 City News is reporting that "Three men in Abbotsford have been arrested by police after an investigation into numerous overdose deaths within the city. According to Abbotsford Police Department, its Drug Enforcement Unit was able to find the drug suppliers and dealers of a 'known drug-trafficking operation.' In a statement, AbbyPD says during a search of the three men’s homes in Abbotsford and Surrey, it found 1.3 kilograms of fentanyl, heroin, methamphetamine, and cocaine — worth about $200,000."

"Police say they also found three handguns, two of which had silencers, and $90,000 in cash. 'All three males arrested in this investigation are Abbotsford residents associated with the Lower Mainland Gang Conflict (LMGC). DEU will continue to target known members or associates of the LMGC who operate and sell fentanyl within Abbotsford, leading to overdose deaths within our community,' Sgt. Mike Hanninen said." This is what the police arr supposed to do. Note that it was the Abbotsford PD not the CFSEU or the Surrey RCMP. Just sayn.