True North recently reported on Tamara Lich's testimony at the Emergencies Act hearing. I found it somewhat disturbing to hear that the police are still harassing her. That is vindictive and punitive. Those police are oath breakers. They are not keeping their oath to defend the Charter of Rights. Daniel Bulford is former RCMP. He is an oath keeper. The fake news is still slandering him. That is shameful. I've talked about the demonetization of patriots. It shows how far the media has fallen in Canada. Fake news is very real and very persistent.

I just recently saw one report about how another convoy Organizer named Benjamin Dichter helped start a group called LGBTory - a group for LGBT Conservatives. That kind of shatters another stereotype of the fake news. Just because you support low taxes and more freedom doesn't mean you are transphobic or homophobic. No lie can live forever.

Tamara was noble. She always strive to bring credible voices to the table like Daniel Bulford and Brian Peckford. There was another guy the media claimed was a convoy organized but he was a bit of an idiot. He wasn't a trucker. He'd just YouTube himself riding around in a car yelling honk honk. It was kind of silly. Yet Tamara Lich had credibility. That is why they are still attacking her.

The fake news is going off about Doug McCallum's bogus trial. They admitted that their star witness who was stalking and harassing him and calls herself the fairy godmother got in his face and was insulting him and saying how repulsive he is and that his skin is scaly. This is a woman with mental health issue that was abusing the mayor while he was out getting groceries. The police should have protected him from her. Shockingly they charged him instead of her.

That deviant act shows the world why we need to get rid of the RCMP in Surrey. Their arrogance is completely out of control. We need a police force that's accountable to Surrey not the WEF.

Then the fake news was going off about how the surveillance video of the assault was inconclusive as to whether or not the Fairy godmother actually ran over his foot with her car. Inconclusive. That means Doug McCallum should never have been charged. That's what that means. I don't care if she ran over his foot or tried to run over his foot. She is a whack job that was harassing the Mayor. Do I really believe the RCMP fixed the Surrey election? Yes I do. 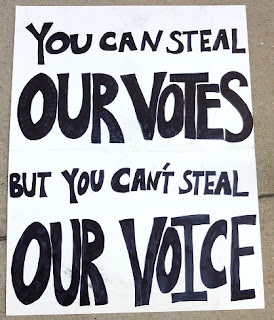