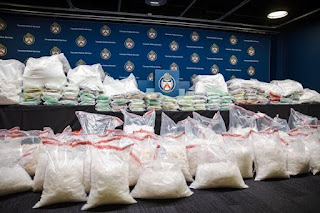 "They say search warrants were executed at the two addresses and for three vehicles on Oct. 5, when the drugs were sized. Police say they are looking for three individuals connected to the trafficking of the drugs. They say the suspects will be charged with possession of cocaine and crystal methamphetamine for the purposes of trafficking when they are arrested."

This is a broken record. Every province except BC make drug busts. Ask yourself why.

Posted by Dennis Watson at 2:23 AM