There are massive protests in Brazil implying voter fraud in their recent election. The fake news isn't covering it or is misrepresenting it. They claim supporters of the candidate who lost the election are protesting the results of a democratic election. However, when you see the insane number of people participating in the protest, an independent recount is without question in order. Electronic voting or counting is not secure. We need physical recounts of actual ballots.

Update: Reuters reported that "The U.S. Central Intelligence Agency (CIA) director last year told senior Brazilian officials that President Jair Bolsonaro should stop casting doubt on his country's voting system ahead of the October election, sources told Reuters." Oh right. The CIA made sure it was a fair election. Not. CIA director urged Bolsonaro to stop doubting Brazil’s voting system. The CIA is inherently dishonest. Recount the physical ballots. That ends the controversy.

Why is William Burns, the director of the CIA featured on the World Economic forum's website? The WEF profile states that Burns is the first career diplomat to serve as Director.

"Ambassador Burns is the current Director of the Central Intelligence Agency and immediate past president of the Carnegie Endowment for International Peace, the oldest international affairs (Globalist) think tank in the United States." They are funded by China and Robert James Nicholls.

John Brennan voted Communist before he joined the CIA. 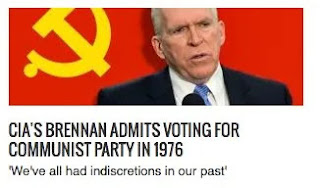