Justin Trudeau gets rebuked by Winnie the Pooh 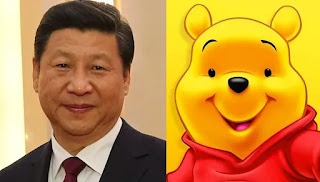 CNN is reporting that "Chinese leader Xi Jinping was captured by Canadian broadcasters in a rare candid moment on Wednesday, where he was filmed chiding his Canadian counterpart, Prime Minister Justin Trudeau, over what he described as 'leaked' discussions."

“Everything we’ve discussed has been leaked to the papers and that is not appropriate,” Xi’s translator said. The Beib babbled but there are three points here. Leaking private conversations to the press isn't a difference of opinion, it's stupid and lame. It means you can't be trusted.

CNN, the Communist News Network, admits that Xi Jinping's public appearances are highly choreographed. Like when he crushed the traditional democratic aspiration of the Communist Party and had the former president removed and erased only to replace himself as supreme chancellor for life just like Senator Palpatine. That too was highly choreographed.

The President of the Communist party is not *supposed* to be president for life. When his time is over he steps aside for a new president to take his place. Xi Jinping refused to do that. Once he got all that power, he refused to let go of it and wanted more, more, more.

This is why Communism never works. It's always hijacked by a greedy dictator. The history of all world conflict is not a class struggle, it is a struggle against greed and oppression. Whenever you see Justin Trudeau with Xi Jinping, he looks like a pathetic little girl enamored by a pop star. He has a crush on him because Xi is Justan Idiot's idol. The Beib wants to be a dictator just like him.

The CCP launched a defamation campaign against the Falun gong rationalizing their unlawful imprisonment and torture. Then they denied executing them for organ harvesting. They lied. When it was proven they lied, they lied again and said they had stopped when they continued the atrocity in secret.

Justin Trudeau's idol is a mass murderer. That's why I call him Commodus. Justin's father protected civil liberty by law in the Charter of Rights while Justin Trudeau threw it all away. Xi Jinping knows that Justin Trudeau's days are numbered so his choreographed event was an attempt to publicly distance himself from him while he grooms a replacement.