Ottawa is seeking to ban all legal firearms ownership

True North is reporting that "After the Liberals moved to ban hundreds more new models of rifles and shotguns through a last-minute amendment to Bill C-21, Alberta Justice Minister Tyler Shandro says the federal government is seeking to ban legal firearm ownership altogether." That is World Economic Forum crazy. Pride cometh before the fall and great shall be the fall thereof. 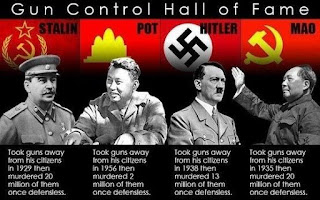 The Manitoba government is reporting that "Manitoba has consistently stated that many aspects of the federal approach to gun crimes unnecessarily target lawful gun owners while having little impact on criminals, who are unlikely to follow gun regulations in any event. In Manitoba’s view, any buy-back program cannot further erode our scarce provincial police resources, already suffering from large vacancy rates, and away from focusing on investigation of violent crimes,” said Manitoba Justice Minister Kelvin Goertzen."

"Alberta, Saskatchewan, Manitoba and New Brunswick called on the federal government to halt plans to use scarce RCMP and municipal police resources to confiscate over 100,000 legally acquired firearms from Canadians. The Prairie provinces had already written to their RCMP divisions indicating that provincial funding should not be used for that purpose."

The National Post is reporting that "Saskatchewan and Manitoba have followed Alberta’s lead and informed the federal government they won’t use local resources to enforce a federal initiative they don’t support. Christine Tell, Saskatchewan’s Minister of Corrections, Policing and Public Safety, wrote a letter to the highest-ranking RCMP officer in the province telling them not to use provincial resources for the program. 'The Government of Saskatchewan does not support and will not authorize the use of provincially funded resources for any process that is connected to the federal government’s proposed ‘buyback’ of these firearms,' she said in the letter."

Guns.com is reporitng that "The passage of a motion by opposition parties in the Yukon brings to five the number of provinces and territories standing against the Trudeau government's planned mandatory gun buy back program." After all these provinces said no Justin Trudeau added a ship load of more long guns to the list. People in rural areas need long guns.

WATCH: Conservative MP @DaneLloydMP says the government’s latest amendment to restrict virtually all semi-automatic shotguns and rifles would impact hunters, not criminals, and is meant to divide Canadians for the Liberals’ political success.