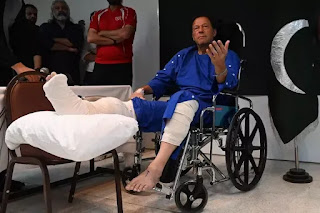 CTV is reporting that "Pakistan's former Prime Minister Imran Khan said Friday he was pausing his march on the capital, Islamabad, a day a gunman opened fire on his campaign convoy, wounding him and killing one of his supporters. Thirteen other people were also hurt in the attack. "Khan spoke to reporters late on Friday - his first public remarks since the shooting - and pledged that he will resume his protest once he has recovered from the bullet wound. The bullet hit him in the right leg, above the ankle."

Is CIA behind regime change in Pakistan? "Dr Shahbaz Gill is now of the opinion that the US and allies want PM Imran Khan removed because his policies are against their regional and global interests." He supported better relations and trade with Moscow during the Russia-Ukraine crisis.

Sarkozy's involvement with the Karachi affair in Pakistan isn't just about Sarkozy getting kickbacks from an arms deal. It's about Sarkozy being involved with murder under the guise of a terrorist act when those kickbacks were stopped. That is what we need to remember.

Once again we see the CIA supporting Islamic extremism to promote Globalism.