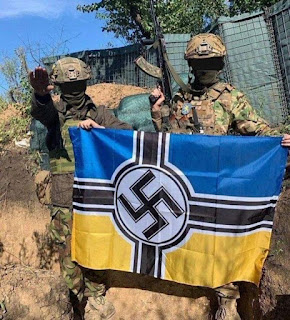 The Ottawa Citizen reported that "The news conference on Monday by Foreign Affairs Minister Chrystia Freeland was interesting not for the announcement that Canada was extending its training mission to Ukraine but for the questions and answers about the minister’s grandfather."

"What are the sources for the information that Freeland’s grandfather worked for the Nazis?"

"For starters, The Ukraine Archival Records held by the Province of Alberta. It has a whole file on Chomiak, including his own details about his days editing the newspaper Krakivski Visti. Chomiak noted he edited the paper first in Crakow (Cracow), Poland and then in Vienna. The reason he edited the paper in Vienna was because he had to flee with his Nazis colleagues as the Russians advanced into Poland. So what was the Krakivski Visti? It, like a number of publications, had been seized by the Nazis from their Jewish owners and then operated as propaganda outlets."

"On Wednesday the Globe and Mail reported that, “Foreign Affairs Minister Chrystia Freeland knew for more than two decades that her maternal Ukrainian grandfather was the chief editor of a Nazi newspaper.” Photo below shows Chomiak at a party – he is to the right of the man smoking. On the far right (right hand lower corner of the photo) in uniform is Emil Gassner, the Nazi administrator in charge of the press for the region including Cracow." 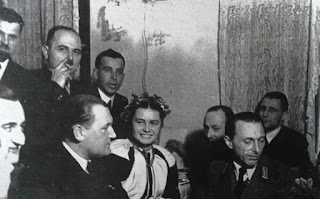 All of a sudden that makes the PMO's claim that Chrystia Freeland recently posed with Ukrainian Nazis holding a Nazi banner by accident somewhat less believable that she did it by accident. 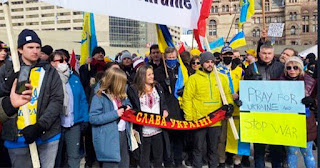