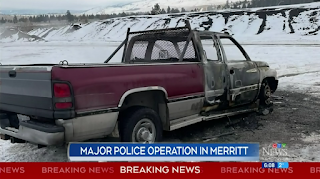 CTV is reporting that "Merritt RCMP said they were called to the 2100 block of Priest Avenue in the early hours of the morning for a shooting they believe was targeted. 'The callers identified a distinctive, mid-90s grey Dodge Ram pickup with a maroon box in the area at the time of the shooting,' police said in their release. The truck then fled the scene at a high rate of speed."

"Shortly after the shooting was reported, a vehicle matching the truck's description was reported on fire near the Highway 5 and Highway 5A on-ramp, police said, adding that the area is known as the Goedy Creek pit. The truck was later determined to have been stolen around 5:30 a.m., and police believe it was stolen solely for the purpose of the shooting"

OK a stolen vehicle used in a shooting near homes is abandoned and set on fire. Yes that sounds targeted. However CTV is also reporting that "Mounties in Merritt, B.C., say they strongly believe shots fired in the city early Friday morning are connected to the incidents that saw up to 100 rounds discharged there earlier this week." OK that sounds a bit fishy.

OK that sounds a bit fishy. When I first heard about the previous incident where up to 100 shots were fired and no injuries resulted, I was like are you sure that wasn't just someone target shooting in a gravel pit? Merritt is pretty rural. You're allowed to go target shootings with long guns in rural areas. People like gravel pits because it's safer.