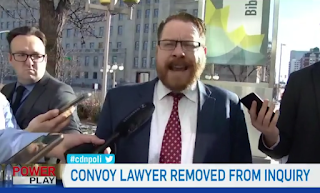 I just want to point out the obvious. The Emergency Act Inquiry is a complete farce. We all knew that going into this so today's events should come as no surprise. The police had every right to tow vehicles illegally parked but they had absolutely no right to beat civilian protesters. The police who did that are oath breakers. They broke their oath to uphold the Canadian Charter of Rights.

The Toronto Star is reporitng that "One of the lawyers representing the core Freedom Convoy organizers at the Public Order Emergency Commission was asked to leave the hearing room on Tuesday after a tense exchange with the commissioner overseeing the proceedings. Commissioner Paul Rouleau instructed security to remove Freedom Corp. lawyer Brendan Miller, after arguing over federal government redactions to documents, and an attempt to have a ministerial staffer added to the witness list."

"First raising this request when the commission took a break during Mendicino's testimony, the commissioner told him that if he wanted to have a last-minute witness added to the roster, he needed to make his submission in writing." Except he already had. Twice. When the lawyer pointed that out to the judge the judge had him removed. This is a complete farce.

What's the real issue here? Whether or not the Emergency Act was ever remotely justified, the government had absolutely no right to freeze every bank account of hard working civilians who donated to the truckers on route to Ottawa. That was a criminal act. Do you think this fake inquiry will ever address that? Not a chance. That makes the whole thing a complete farce. 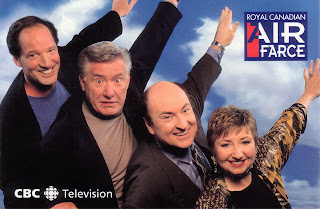 It comes as no surprise that the Kangaroo court judge violated the Canadian Charter of Rights and denied the convoy the right to legal representation since the whole thing was a violation of the Charter of Rights but we had hoped for something better. Judges need to be publicly accountable. In the US Judges are elected. In Canada judges have no public accountability.

Premiers opposed Justin Trudeau's use of the emergency act

1/2 The NDP Caucus in 1970 under Tommy Douglas took a courageous and principled stand against the War Measures Act.

Today's @NDP under Jagmeet Singh betrays that legacy and supports Liberals on the Emergencies Act.

The chief superintendent in charge of the Ontario Provincial Police (OPP) response to the Freedom Convoy said “The profile of the protester for this event was none like I’ve ever seen in my 36-year career. We had everything from grandparents – you know, my first day in this assignment I was shown a picture of two officers that had worked for me in the past, who retired, who were in the crowd – we saw children, we saw a lot of crestfallen police officers in the crowd, nurses . It wasn’t your normal group of people that you’re dealing with.” 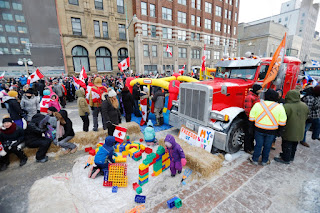