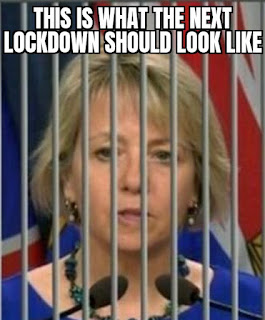 True North is reporting that "Dr. Deena Hinshaw has been fired as Alberta’s chief medical health officer. The Alberta government announced on Monday afternoon that Dr. Mark Joffe, the vice-president and medical director for Cancer Care Alberta, will take her place."

The National Post is reporting that "Alberta's top doctor replaced as Danielle Smith looks to alter province's COVID." Altering their approach. Finally someone with a brain.

The Calgary Herald is reporting that "There was understandable fear that Smith would name a quack to the key CMOH post. Joffe is anything but." GMAFB Bonnie Henry is the quack. She's the one that should be fired. The fake news keeps on spinning.

"Premier Danielle Smith of course has openly advocated ivermectin and said AHS was suppressing information about alternate treatments." No f*cking kidding. Let's talk about ivermectin for a minute. Ivermectin is a totally safe drug for humans to treat parasites. It's so effective they also use it on animals as well as humans.

To claim that ivermectin is not safe and is not for humans is a bold faced lie. If someone tries ivermectin for Covid, the worst thing that can happen is nothing. Except that's not entirely true. It will get rid of human parasites and that is a good thing we should all be concerned about.

India tried ivermectin on a huge scale and it was very effective. There is no reason to ban people from trying it if they want to. The same with hydroxychloroquine. Donald Trump did not invent hydroxychloroquine. It is a perfectly safe FDA approved drug used to treat lupus. Laura Lynn Tyler Thompson has been on it for years. They give it to pregnant women.

The public gets understandably concerned when the media consistently lies to us about viral treatments for Covid. It forces us to question their motive. The way Bonnie Henry speaks it would appear that she endorses lithium for the treatment of Covid. Hey. whatever turns your crack. The point it banning safe drugs is criminal. It feeds their agenda.