Devil's Rejects capped a guy in their clubhouse 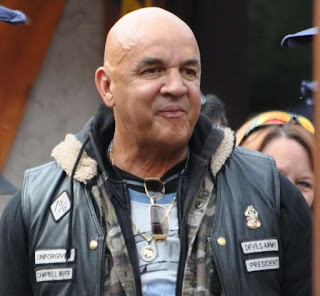 Whoa, TBM Nation is reporting that "Richard Ernest Alexander, former president of the Devils Army Motorcycle Club, is accused of shooting 30-year-old Saanich man John Dillon Brown in the back of the head on March 11, 2016 in the Devils Army’s Campbell River clubhouse. His body was found the following day in the trunk of his Honda 75 kilometres north of Campbell River near Sayward, British Columbia. Alexander drove the Honda to the Sayward area and abandoned it."

"He described the Devils Army as a support club for the Hells Angels. Events leading to Brown’s death were set in motion in November 2015, when a visiting group of Hells Angels and a Devils Army member got into a fight with Brown at the Voodoo Lounge nightclub in Campbell River. Phipps said Brown happened to be a competitive amateur mixed-martial arts fighter. 'He held his own against the group of bikers,' Phipps said. “The fight was captured by the Voodoo Lounge’s surveillance system.” We wanna know if Priscilla capped him with his pink gun.