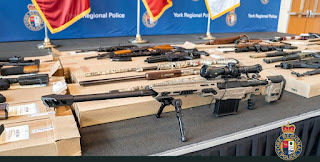 The Toronto Star is reporting that "More than two dozen GTA men have been charged as police say they have busted an international drug trafficking ring that wound into Western Canada, California and India. The complex police operation included York Regional Police, Peel Police and the RCMP. Dubbed Project Cheetah, it culminated this month in the seizure of $2.3 million worth of drugs including 10 kilograms of cocaine, eight kilograms of ketamine, three kilograms of heroin and 2.5 kilograms of opium, police said. Investigators said they also seized 48 firearms and $730,000 in Canadian currency." Every province except for BC makes drug busts. Ask yourself why.
Posted by Dennis Watson at 12:56 AM