The Last Supper: A Virtual Easter

Different countries have different traditions that revolve around Easter. For my kids it was the Easter bunny brining chocolate eggs on Saturday and church on Sunday remembering the crucifixion and resurrection. Easter bonnets used to be a tradition in the West. Many countries in Cental America and Europe have a week of celebrations called Semana Santa. Rick Steves covered some of these traditions he witnessed in Spain.

When I was young, I visited Notre Dame in Montreal and was in awe of the architecture. A protestant lit a candle for a deceased relative and showed me the stations of the cross. I saw that as a positive tradition which helped people remember Him. I also visited St Pauls' cathedral in London which was also stunning as is Westminster Abbey.

Statues, like paintings, help us remember deity. We had a Christian family stay in our home once and the little boy pointed to a picture of Christ and said who's that? I was a bit confused as the family were clearly Christian so I said Hey Zeus which is Spanish for Jesus. Nothing more was said. Later I found out that they were of the school of thought that Christians shouldn't have pictures of Christ in their home. That in my opinion is bizarre and makes no sense whatsoever. 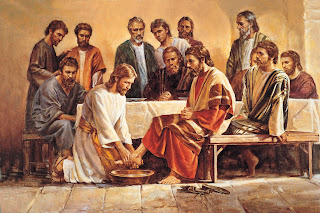 In the United Church they had a special service on Maundy Thursday where people would wash each other's feet in remembrance of Christ's commitment to service. Lent is a 40 day preparation before Easter where people remember the suffering and sacrifices of Christ.

With a continuation of the Covid fraud, some Easter celebrations are virtual. It reminds me of a story I once heard about a group of Christians who were kicked out of church because of their poverty. The church had become corrupt and carried away with their pride. An angel appeared to the group who were very sad about their state and said it is good that you were kicked out of church because being religious is a way of life. It isn't just going to church on Sunday.

Today I want to have a virtual Easter and talk about the Last Supper which DaVinci painted. The final meal Christ shared with his apostles before he was murdered where he introduced the Communion. He said he would be betrayed by one of his own and said to Peter, when thou art converted, strengthen thy brethren. The communion remains a central part of Christian worship.

"This is my body broken for you. This is my blood shed for your sins." Many people including thieves and criminals have been crucified. Christ's sacrifice went beyond that. His atonement started in the Garden of Gethsemane where he sweat great drops of blood as his eyes were opened and he saw, felt and experienced, all the suffering, sins and sicknesses of his people.

That suffering returned on the final three hours while Christ hung on the cross to fulfill Isaiah 's prophecy which said "I have graven thee upon the palms of my hands; thy walls are continually before me." Christ has seen and felt our suffering. He has compassion for us.

The movie the DaVinci code presented an interesting theory as to what the holy grail really was. I'll have to admit that Monty Python's dry humour about the quest for the holy grail kind of shed light on the moral dilemma. The cup that Christ used in the Last Supper was just a cup. It wasn't magical, the atonement was magical. To spend your whole life searching for an object was as misguided as to mistake a finger for the moon instead of seeing what it was pointing to.

The chalice represents the suffering of Christ - the blood he shed for our sins. That is what we need to remember. Not a cup. Whether or not Christ was married as the movie the DaVinci code implies, does not change his divinity. It does not diminish his sacrifice and atonement. It's an interesting theory but it doesn't really matter. What matters is how we live our life. That is what matters. Finian's Inferno - I see you. What we do in life echoes in eternity. 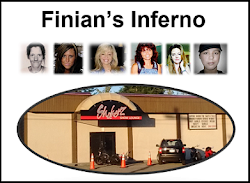 The purpose of this post is to highlight the Last Supper. The final meal that Christ shared with his apostles before he was murdered which Davinci painted not the painting itself. The Movie the DaVinci code claims that there are no cups in the painting. Oh really? Zoom in. I see 12 glasses in the painting. Whether or not they shared from one cup or each had their own glass doesn't matter. What matters is what the communion represents. It is a remembrance of Christ's suffering and sacrifice but it is also a new covenant. A promise to remember him and follow him.

As the actress pointed out, just because DaVinci painted it doesn't make it true. He wasn't there. He painted it more than 1400 years after the event based on the same information we have. In fact, most of the early paintings of Christ I personally find anti climatic. They tend to portray Christ as weak and feminine when he was anything but. Greg Olsen is a popular modern artist that portrays Christ in a more realistic perspective as does Jon McNaughton and Del Parson.

Back in Ireland they had lots of pictures of the scared heart. They'd have a portrait of Jesus or Mary with a large red heart jumping out at you. At first I thought it was a bit weird, then I realized it was allegorical. There is no question Jesus had a big heart just like William Wallace in the movie Braveheart or the reference to Richard the lion heart.

I knew a young American who went to Dublin and liked a young Catholic girl there. He met her mother and they gave him a tour of a Catholic cathedral. The mother pointed to a picture of the sacred heart and she said, that's the sacred heart. Do you believe in the sacred heart of Jesus? My friend was a bit antagonistic and said yeah, we believe in his heart, his hand, his legs. We believe in all of him. Then the daughter said OK it's time to go and separated them before they got in a big fight. I laughed when I heard that. I could easily visualize all of them doing that.

I never got into the moving statues or the bleeding paintings myself. I'd ask why would God do that? Why would God make a painting bleed? What's something positive and uplifting we can take away from that? I couldn't see anything. To me it just seemed dark and weird. Yet I did see something positive in the sacred heart paintings. It's allegorical. It reminded me of a Rocky song about hearts on fire. I believe in the freedom of religion. That is what I believe in.

It's like when I saw one of my neighbours sitting on a rock wearing a hijab holding a rosery. I was shocked, pointed to the rosery and said what's that? She couldn't speak English so she showed me that she would say a prayer for each bead. I was like yeah, I know with what you do with that but why do you have one? She was Muslim. Turns out that Muslims have their own rosery. It's very similar and I was like imagine that. People are more similar than they realize.

God is not a respecter of persons. Any nation that honours him and is righteous is accepted of him. The parable of the good Samaritan says it all. What we do is more important than what we say or what we profess. Christ taught us to serve each other. That is what he taught. 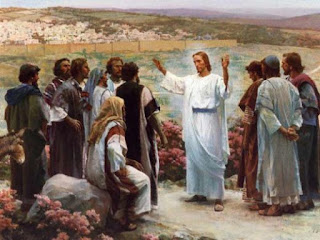 Posted by Dennis Watson at 3:33 AM