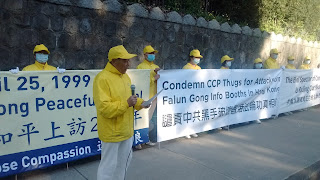 Today was the 22nd anniversary of a large peaceful protest in Bejing where 10,000 Falun Gong members peacefully rallied asking for the Communist government to stop arresting and persecuting their members. This is a copy of a press release about today's event. Sadly, other than the Epoch Times and the New Tang Dynasty, no other main stream media were present. 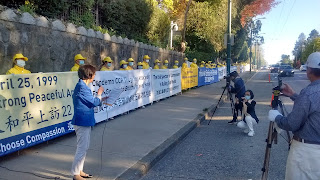 The Communist government had begun arresting Falon Gong members and persecuting them. They were told that if they want to ask for the release of their members, they had to take it up with Bejing because it was a national matter not a local matter. So they did. 10,000 stood in peaceful protest. After that event the State run media claimed the Falun Gong attacked the capital and was the reason the Communist government cracked down on them. That was a lie.

Anyone who knows the Falun Gong knows how ridiculous that is. The Falun Gong are very peaceful and very respectful. The idea of them attacking the capital is absolutely ridiculous. This is how the state-run media has consistently lied about the Falun Gong for 22 years. 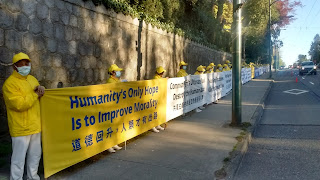 There's more video footage coming in but before I post that I would like to comment on a question the reporter from the New Tang Dynasty asked me. She asked me how I felt about the protest and if it was peaceful. I said it was completely peaceful and very uplifting. After a few brief speakers they just stood there holding banners with very calm uplifting music playing in the background. That peaceful feeling lingered with me the entire ride home as I reflected on that question. In a world filled with violence and negativity, we need more Falun Gong who are peaceful and positive. They are dignified and exemplify the quest to aspire to something higher.