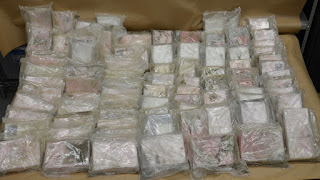 CBC is reporting that "RCMP say they have made the largest cocaine seizure in Manitoba history while disrupting a major international drug trafficking network that funnelled drugs into the province through Ontario. The bust happened in the Winnipeg area, RCMP said, but could not offer more detail because the investigation is ongoing."

81 keys in Winipeg. Things that make ya go hmmm.... CTV is reporting that an Ontario man has been charged. So WTF? No Really, WTF? Evidently the RCMP aren't the problem because every province except BC makes drug busts. Evidently the problem is E Division - the RCMP in BC.

The RCMP have arrested Stephen Ferenc Stumpf, 41, from Peterborough, Ont. He has been charged with possessing a controlled substance for the purpose of trafficking and possessing proceeds of crime over $5,000.

Posted by Dennis Watson at 2:14 PM