Jason Kenney is the Alberta Abomination 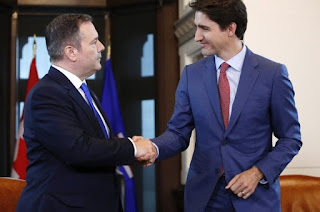 Today I want to address the Calgary abomination that Rebel News has highlighted. It is Jason Kenney. Today Rebel News was on site where the RCMP built a fence around a church outside of Edmonton. These are law enforcement officers lining up to piss on good soldiers' graves. There are no oath keepers among them. You can sell drugs in Edmonton but you can't go to church. That is unequal protection of the law.

This isn't a three-week health measure to flatten the curve. This is a year long theft of our civil liberty which is protected by law and our right to earn a living. Indeed it is a tale of two cities. Over Easter we saw the police in Calgary enter a church armed with guns, tasers and handcuffs. Places of worship are protected by law just like embassies are. They defied that law.

Jason Kenney has successfully killed western alienation. No one wants to merge with him. He is the one responsible for this abomination. Jason Kenney says we must defeat these variants. He wasn't talking about viruses because when viruses replicate themselves they get weaker not stronger. He was talking about people who disagree with his version of globalism.

Leslyn Lewis got more votes that Erin O'Toole and Peter McKay in the second round. She was dropped from the ballot because she received less points yet no one has shown how the points are calculated to prove she lost. Election fraud matters. That is why we need to discuss it.

Our civil liberty depends on it. Maxine Bernier opposes lockdowns and so do I. So do the real doctors. The ones not in bed with the pharmaceutical companies or performing organ transplants with organs from political prisoners murdered to order.

Meanwhile back on the ranch, the Toronto Star is reporitng that "A member of a committee that advises B.C. Premier John Horgan is under fire for referring to accusations of Uyghur genocide in China as lies. Bill Yee, a retired provincial court judge and a member of B.C.’s Chinese-Canadian Advisory Committee, made the comments during an interview on the Toronto-based Chinese-language radio station A-1. Those statements have a Canadian organization that advocates for democracy in Hong Kong calling on Horgan to dismiss Yee from his advisory role."

This guy is a former BC court judge covering up a genocide in Communist China. It doesn't get any more evil than that. We saw how the BC Courts ruled on religious freedom. When the courts fail to administer justice, they are like salt that has lost its flavor - Good for nothing.

Next the Blarney Inquiry will hear from BC Rail enthusiast Christie Clark and Rich Coleman. Coleman is the casino money laundering king. He's the one that disbanded the task force that investigated money laundering in casinos. Governments should restrain crime not profit from it.

Posted by Dennis Watson at 2:52 PM