Rich Coleman has allowed gangs to flourish in BC 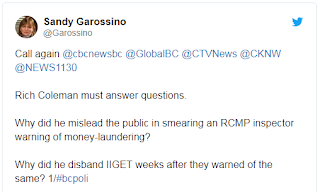 Rich Coleman's head is on he chopping block. His past misconduct is finally catching up with him. Laila Yuile has cited Sandy Garossino as well as the Peter German report linking Rich Colman to disbanding the Police Task force that investigated organized crime in Casinos after it came out with a damning report about the Hells Angels laundering money in BC Casinos. However, this is nothing new. We told you so. Now other media outlets are picking up on the story.

That's not all Rich Coleman did to help gangs flourish. Rich Coleman disbanded OCABC in 2004. OCABC was the regional organized crime task force that targeted the Hells Angels criminal activity in Operation Phoenix. Prior to Operation Phoenix, which the RCMP deliberately sabotaged, Allen Dalstrom said "when it came to organized-crime investigations, the RCMP had done “f--- all here for 25 years”. So the province set up a task force to finally investigate organized crime in BC and Rich Coleman promptly shut it down. Again.

That's still not all. Prior to the Kelowna Summer Jam, Pat Fogarty said the Hells Angels aren't the problem in Kelowna, it's the other guys we have to worry about. When the OMGU proved him wrong, Rich Coleman and the Christy Clark government disbanded the OMGU. Ever since then gang enforcement in BC has been compromised and the gang task force stopped targeting the Hells Angels criminal activity. They just focused on seizing the proceeds of crime without lifting a finger to disrupt street level drug trafficking. They just wanted to collect a fee for letting it prosper.

Then the compromised BC Gang task force's spin doctor claimed "Lack of criminal designation for Hells Angels in B.C. allows biker gang to flourish." That was simply untrue. The lack of criminal organization status didn't prevent the OMGU from successfully convicting David Giles and Johnny Newcome in Kelowna. Seizing the proceeds of crime is a smoke and mirrors distraction. Gangs in BC are flourishing because the OMGU was disbanded and the compromised gang task force stopped targeting the Hells Angels drug traficking.

To fix the problem we need to bring organized crime back into provincial jurisdiction because the federal RCMP don't want to touch it. We can keep the Surrey RCMP as long as they are willing to enforce the law and stop street level drug trafficking. That is the New York model. I was there.

Rich Coleman should be in jail along with Wally Oppal.