Rich Coleman can rot in Hell 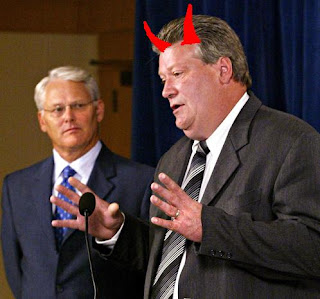 Rich Coleman can rot in Hell. It’s the Gordon Campbell way to steam roll over the democratic will of the people. He should be ashamed of himself but he’s not. That says it all. Others have also said how both in Langley and believe it or not Richmond as well, local residents opposed a casino, were promised no casino only to have it quietly slipped in after everything died down. There is big money in organized crime buying off politicians.

Before it was disbanded in 2009, the RCMP's Integrated Illegal Gaming Enforcement Team (IIGET) gave a number of warnings about the presence of organized crime at casinos in the Province. Now, as Vancouver prepares for public hearings on the BC Place casino - set to be the province's largest - the now-defunct unit's warnings are spurring questions about a potential rise in criminal activity and the ability of police to cope.

In a 2009 report obtained by The Vancouver Sun through a Freedom of Information (FOI) request, the IIGET warned of casinos' "extreme vulnerability" to money laundering. Many investigations across Canada have found that members of organized crime use casinos for criminal purposes, the report states. A separate internal assessment, obtained by the Globe and Mail through a FOI, advised that Hells Angels members had, in some cases, succeeded in infiltrating the province’s “legitimate gaming operations."

The 12-member IIGET was dissolved on April 1, 2009 by then-Housing Minister Rich Coleman. He said the the team, which cost $1 million a year, was not cost effective.