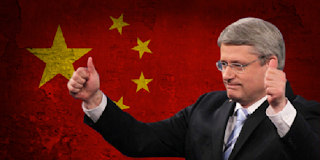 MSN’s news site ran a photo article on some of the more controversial decisions Stephen Harper has made in 2012. They rightfully point out, no matter how you feel about Harper, here are some eyebrow raising decisions he’s made over the year.

One of the items was getting rid of the long gun registry. That however is the only conservative thing he’s done all year. The rest are outrageous. They compared how he went to Congo and expressed concerns about human rights while he didn’t bat an eye to China’s human rights abuses and gave them Canada’s oil rights. That was astounding. This is a corporation with their own police force that arrests people for their religious affiliation. They now have Canada’s oil rights to use at will in time of war.

Robocalls on their own were shocking. That is the direct opposite of democracy. It was a cheap and dirty trick that revealed the party’s fundamental character. Not caring about the democratic will of the people. Warrantless surveillance is all about Big Brother and has nothing to do with conservative values Harper has apostatized from. Vikileaks even went so far as to say people who oppose their crime bill support pedophiles. Yet later admitted he hadn’t even read the bill and was surprised to discover it gave police the right to put someone under surveillance who had not been accused of committing a crime.

Commercials and attack adds paid for with tax dollars brainwashing voters is a dark precedent. Harper said anyone who doesn’t vote for him is either a socialist or a separatist. Yet he is the separatist because he alienates Quebec in everything he says and does. He is the communist because he has not only sold our sovereignty to a Communist country and destroyed the free market by letting large corporations obtain monopolies on the market, he has thrown away the Charter of Rights by following us around everywhere we go.

They say that since a frog is cold blooded, if you put him into a pot of hot water he will instinctively jump out. Yet if you put him in a pot of warm water and gradually increase the heat, the frog will stay there until it boils. This is what we now see happening to democracy in Canada. Buyer Beware. These new trade agreements are not about free trade. South of the 49 Obama’s Fast and Furious con is more of the same old bullsh*t we saw from other administrations that attacked the constitution instead of preserving and protecting it like they promised. Right now the biggest enemy we have is the enemy from within. It’s called treason.

On the flip side I failed to mention the two rising stars on the political landscape. Thomas Mulcair has taken hold of Jack Layton’s torch and Justin Trudeau is likewise a breath of fresh air in a room full of toxic smoke.

Harper calls Mulcair a socialist yet Mulcair claims that he often sounds more like a conservative than Stephen Harper. Which isn’t hard because Harper has proven to be anything but conservative. It’s inherently ironic he calls Mulcair a socialist while he himself surrendered Canadian sovereignty to a Communist dictatorship. My pet peeve is this endless insanity exploiting outdated stereotypes claiming the NDP will tax and spend recklessly. That is what Harper is doing. The $65 billion bank bail out is unprecedented. No government has ever put us that far in debt for no reason. Ever. Trade agreements that burn tax dollars in bizarre compensation awards is treason and wasteful.

Wasting millions on a fleet of jets that don’t work in Canada’s arctic while cutting funding for the military and coast guard is also treason. The HST is a raise in small business tax just like Mulroney’s GST was. No lie can live forever and these ridiculous attack adds that are clearly false are becoming irritating and offensive. Conservatives in Canada need a Ron Paul or John Cummins not another neo con that will sell our sovereignty to Corporate Communism.

I like Thomas Mulcair. I also like Justin Trudeau. In all fairness, a blog reader sent me a link to some dirt on JT that needs to be addressed. The article claims JT was to speak at an Islamic conference in Toronto last month. One of the sponsors of that event has been accused of having ties to Hamas. At first I thought the link said HAMC.

It is possible that a charity in Palestine could have links to Hamas. That claim is being appealed nonetheless. Yet what if Hamas had a convention in Canada? I’d love to have an opportunity to speak to them. That doesn’t mean I support terrorism. I support Israel’s right to have a home and be a nation. I will admit that creating a Jewish state is inherently problematic because anyone living there who is not Jewish cannot be a citizen of that nation and are then residents without a passport. Citizens without a nation. Israel then becomes a nation without a constitution.

I do not support terrorism. Back in the day, FLQ graffiti in Quebec was seen side by side PLO graffiti. That is conflicted. Yet it confronts us with the dilemma of refusing to dialogue with terrorists. Were George Washington and Ben Franklin terrorists? We refuse to speak with terrorists but will we speak with revolutionaries? Killing civilians is not being a revolutionary. Yet that is exactly what Hiroshima and Nagasaki did.

We cannot blindly endorse Israel any more than we can blindly endorse Palestine. We can support peace. That is our moral obligation. The sponsor of the Islamic Conference in Toronto ended up pulling out to avoid the potential for conflict. In Canada, Muslims have a right to exist just as much as anyone else as long as they don’t infringe on the rights of others.

Posted by Dennis Watson at 8:40 AM