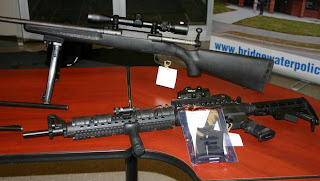 Two Bridgewater schools were under lockdown last Monday after police received reports of "a distraught male inside a residence with a firearm described as an assault rifle." After obtained a search warrant, police foung eight firearms in a grow op along with some cocaine.

Sheldon Earl Bowers, 37, of Lapland Road in Wileville appeared before Judge Gregory Lenehan in provincial court Tuesday to face charges of trafficking, producing and possessing marijuana, possessing cocaine, possession of a firearm for a purpose dangerous to the public peace, unsafe storage of a firearm and threatening to kill his father.

Bowers has a criminal record that includes a drug and sexual assault conviction in 1994, but the prosecutor said the Crown was more concerned “with nature of the charges that are before the court.” A grow op with firearms and cocaine. Let’s hope this has nothing to do with Bacchus or the Darksiders. They’re in enough trouble already.

Speaking of Bacchus, Paul Fowler, the “former” president of Hants County chapter, who has been charged with attempted murder by attacking his ex’s new boyfriend with a hammer, has just been found in breach of his bail conditions after being caught with marijuana. That guy just can’t get a break. He should get a prescription for medicinal marijuana. Surely he needs something to calm him down.