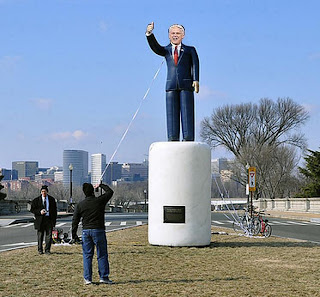 This local scam is an example of how money can be stolen from the public purse. Only this scam was “legal.” Surrey City Development Corporation Presents Campbell Heights North Business Park. What an ironic name for a tainted legacy of sweetheart deals and money laundering. The Campbell Heights Business Park is part of a parcel of land the city of Surrey acquired from the BC Liberals. That’s what the clear cut at 192 st and 32 ave is all about. It’s a parcel of public land that went private. After it was rezoned of course.

The city of Surrey bought the crown land from the BC Liberals at $35,000 an acre. They then sold 260 acres to three dirty developers who were friends of the BC Liberals and contributed to their campaign - Milan Ilich, Joseph Segal and Emerson. They sold it to these campaign contributors at cost, $35,000 an acre and kept 220 acres for themselves. Now those same special developers are reselling that land for $750,000 - $850,000 and acre. They made 24 times their investment in this sweetheart deal. That’s assuming of course they actually put any real money on the table at all. Why Campbell Heights Limited Partnership even contributed to the BC Liberals.

So in reality, the city of Surrey helped these campaign contributors steal $2 billion from the public purse. That is a huge concern. Just like BC Rail. Selling off public assets to campaign contributors. That is what caused the Greek financial crisis. Public money went private then disappeared. That was more tied to investment fraud but this is another example of how public money can be stolen through real estate. The question I want to know is how is the city of Surrey’s secret development corporation going to report their net gain on their 220 acres? That’s at least $1.5 billion. Does that go to tax revenue or does it disappear into some politician’s pocket? That kind of money could sure help pay down the Port Mann Bridge.

Obviously there are many concerns on the table. Helping campaign contributors steal from the public purse is one. Having city hall run their own development corporation is another. Developers are supposed to be independent and bid on projects. They have to apply to city hall for zoning. What Surrey First is doing is just as bad as the corruption trials in Montreal yet what they are doing is legal. It is however, just as dishonest.

The other concern is, why won’t the local media report any of this? Can the local media be controlled by advertizing dollars from the Laura Balance group? Why that would be Conrad Black censorship all over again. Local Surrey blogger Laila Yuile has already reported on the conflict of interest involved in the city running it’s own development corporation as well as the dirty deal done dirt cheap at the Campbell Heights Industrial Park. Yet she is the only one. 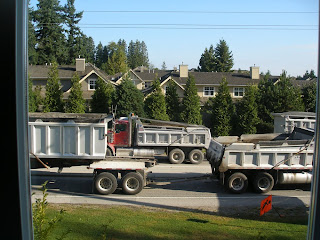 The other concern is simply bad planning. Sending herds of diesel trucks down a residential road is a real concern. Most of 32 ave is rural but not all. One townhouse complex has been steam rolled over by city hall in this sweetheart deal of “progress.” 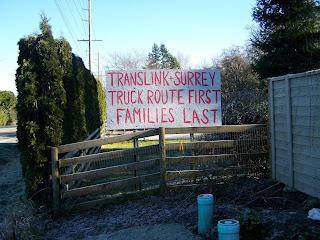 Who pays for all the road developments building a freeway to their industrial part in the middle of what was agricultural land? Is that more tax dollars going to aid and benefit dirty developers who contributed to the BC Liberals? No wonder there is such a close bond between Gordon Campbell’s Liberals and Surrey First. 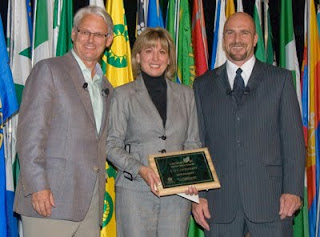 Campbell Heights is an area of Surrey that was named before the infamous sleazeball Gordon Campbell became premier and left office with the lowest approval rating in the country. Yet the Campbell Heights Industrial Park is clearly named after him and is the perfect example of how Surrey First is bringing back Gordon Campbell’s sleazy selfishness to new heights for the world to see. I think that deserves a monument. A giant Gordon Campbell monument to self indulgence. Well done urban cowboys.