The Outlaws are Coming 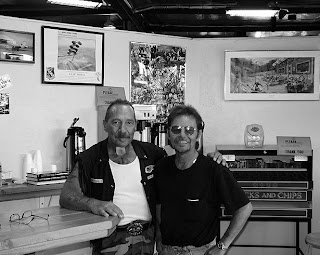 The Redcoats are coming is a famous warning attributed to Paul Revere. I think Sarah Palin got that one a bit mixed up. Yet today we have author Alex Caine sounding the warning that the Outlaws are coming to BC.

Alex Caine has spent 30 years doing under cover work infiltrating the Bandidos, the Hells Angels and the KKK. He’s just released the second book in his three part series on bikers called Charlie and the Angels. Charlie refers to the patch of the Outlaws MC and the angels refers to the Hells Angels. Caine talks about the long standing war that has existed between the two organizations and how in the United States the Outlaws are winning that war.

The Calgary Herald recently wrote about his new book and he just did an interview in Vancouver for thecommentary.ca. Realizing how powerful the Hells Angels have become in BC some will scoff at the idea of the Outlaws coming here. Yet logistically, that is the natural consequence of their pride and betrayal. You can’t keep screwing your own people over and over again and toss them aside when you are finished with them. Sooner or later that is going to come back and bite you in the ass. Just like it did in Winnipeg.

The new gang war in Winnipeg started because the Hells Angels killed one of their own guys from one of their own support groups called LHS – Loyalty Honour Silence, to let the Ontario Hells Angels take over the Thompson drug trade. After they just murdered his friend, they told Billy Bowden to suck it up or become a target. That is bad business. Clearly the Hells Angels are setting themselves up for this kind of violence in BC. If the Outlaws are multicultural, they will clean house in BC against the Hells Angels white supremacists and their Whiteboys Posse.

Alex became the accountant for the Washington Bandidos and wrote the first of his three part series called. 'The Fat Mexican: The Bloody Rise of the Bandidos Motorcycle Club. He talks about the Bandido massacre in Ontario and presents an interesting alternative theory on why things went down. He claims it was connected to a drug rip tied to the Hells Angels. This news article claims the victims in the Bandido massacre had 200 kilos of cocaine with them before they were murdered. I always thought the Ontario Hells Angels denied involvement in that awfully fast.

Alex Caine has a third book in the biker trilogy due to be released this Fall called Angel Dust which is more specifically about the Hells Angels. In one chapter called Silence of the Lambs he discusses the Margo Compton murder as well as another child killed named Dallas Grondalski . I wasn’t aware of that one. Hells Angel Charles Anthony Diaz was convicted of her murder in 2004.

Alex Caine even asked me to write a bit about the Vancouver gang war for his new book Angel Dust in the Regional wars chapter which I gladly did. That should be out this fall.

Here's a recent interview with Alex Caine on youtube about his new book.