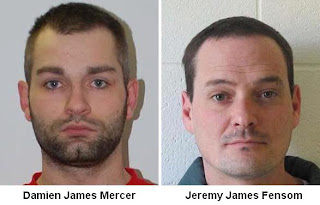 December 20th a Winnipeg man named Dustin Anthony Ferrante was found dead at a Lloydminster motel. The RCMP have charged two men in connection with that homicide. Damien James Mercer, 27, is facing a second degree murder charge and Jeremy James Fensom forcible confinement and intimidating a justice system participant. Now we just need to find out what case the witness they murdered was involved with.

A warrant has been issued for both men and police are asking anyone with information to contact the Lloydminster detachment, 306-825-6350. Tipsters can also contact Crime Stoppers at 1-800-222-8477. There is a cash reward of up to $2,000 if the information leads to an arrest. Rat out a rat and make this world a better place to live.