The New Bar and RCMP HQ in Green Timbers 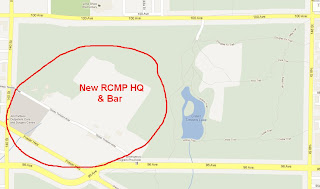 Speaking of flipping protected land into urban development, let’s not forget the Green Timbers Forest clear cut. First it started with an extended care facility for the hospital. Who can argue with building a new hospital? Then all of a sudden they sneak inside and build this huge RCMP headquarters in another Green Timbers clear cut.

We need to remember what Green Timbers is. Green Timbers is a protected forest that residents are as passionate about in protecting as Vancouverites are about protecting Stanley Park. Going in the middle of Stanley Park and clear cutting a section for a new RCMP HQ and bar, would be outrageous. Just as it is in Green Timbers. Tax payers are not allowed to see how far into the forest they have clear cut because this is now conveniently a restricted area.

I know protected land is unprotected by the sweep of a politicians hand, but I personally am more inclined to vote for a politician who pays more than lip service to sustainability and has some desire to honour protected forests than the dirty politicians accepting campaign contributions from dirty developers to clear cut protected land.

The Casino project is still very much on the table. Diane Watts flipped to save her own ass not because she has a moral conscience. She thought the proposal was a good idea. She accepted campaign contributions from the developers. When she saw the opposition to the vote she knew it would be political suicide if she voted for it. Yes voting against it out of fear of not being reelected is better than voting for it knowing the democratic will of the people. Yet let’s not pretend Diane Watts has a moral conscience. She is a bully and we have seen that in action.

Rich Coleman is just a flaming idiot Kevin Falcon, the Gordon Campbell clone, can’t even control. They all feel the same way. He’s the only one being honest about it in the media. Yes they are on a sinking ship and will likely run off to further infect Stephen Harper’s NeoCon federally. I just didn’t want them infecting John Cummings provincial conservatives because he’s the only one in the lot who really is a conservative.

Gateway Casinos lost $1.5 billion. Before we let them build anywhere in the lower mainland we have to answer the question where did that money go because it did not disappear in a sluggish economy. In economic hard times people still gamble if not more desperately. Before we let them do the same thing all over again, we need to find out where that money went and what steps have been taken to make sure it doesn’t disappear again.

The RCMP bar in this new mega HQ is very offensive. The RCMP and the government’s response to the class action sexual harassment suit is to deny everything as always. So much of this sexual harassment has involved alcohol. Having a bar on site is a huge slap in the face of the public and all those who have been harassed at that workplace illegally.

Surrey says no when it gets public but they pass the buck and let the province decide. One source claims they just withdrew their application and did it anyways. Whether they did that or got a deal from the province, having a bar in that tax paid facility is insanely offensive. Does that mean the HAs are allowed to have unlicensed bars in their clubhouses too? What’s the difference?

Look at what we’ve done. We’ve brought a criminal with a history of sexual harassment and drinking at the workplace who in any other industry would have been fired to BC and given him a great big new billion dollar facility and a giant bar for him to dance the night way and mock the judicial system he was supposed to represent. This is corrupt. There is nothing good or right about it. It is a stain on all of us not just law enforcement.

When I look at all this political corruption and law enforcement corruption I’m forced to draw a parallel with Chicago back in the day. Only we have no Eliot Ness to preserve the integrity of the rule of law. Bob Paulson is doing a good job but his hands are so clearly tied by this glaring corruption it makes me wonder if there is any hope at all. Right now, I’m not seeing it. Other than the wonderful job the integrated units did on the Kelowna busts this summer. When you add that to a clear cut protected forest with a brand new bar and a drunken pig from Alberta, once again we seem to take one step forward and three steps back.