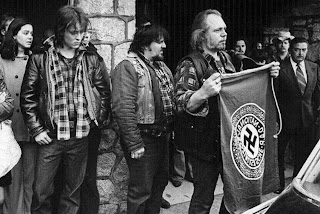 Kim Bolan’s new web site about the Hells Angels is featured on the front page of the printed edition of today’s Vancouver Sun. I’m sure the local boys are thrilled. It even has a picture of Ricky fat ass Ciarniello back when he was still a fat ass but was the treasurer of Satan’s Angels in Vancouver. They patched over to become Hells Angels in 1983. This is a picture of Ricky fat ass and David Black taken in 1977. I want to know why David is holding up a flag with a swastika on it. Surely we can go through the archives and figure that out.

On a forum someone claimed the Vancouver Satan’s Angels kidnapped a 20-year-old man in 1968 and subjected him to a night of torture and terror. It was nicknamed the "case of the devil's butler" because one of the bikers was reported to have commented "now we have a butler" when they first grabbed him in a cafe. Ten members of the club were eventually charged and many, including club president David Black, convicted. Black got seven years.

Turns out a book was written about the event called The Devil’s Butler by Simma Holt which cites court records and police wire taps that were used in court to convict those involved.

Apparently, this book, the Devil’s Butler was very well known at the time and was cited in an Vancouver Sun editorial by Allan Fotheringham June 17 1972. He was referring to the seven men convicted in that case making parole in 1971 and 1972. Turns out, Simma Holt was an MP for Vancouver Kingsway and a credible journalist.

Ernie Ozolins and his girlfriend Lisa Chamberlain were murdered June 02, 1997. The rule says you’re not supposed to kill a patch member. So they kicked him out first. They also stole Ernie’s land from his brother and mother after they killed him. This pdf file talks about the fraud that was committed regarding the lot at 6925 128 Street in Surrey.