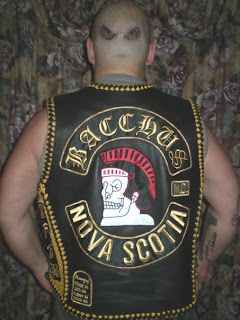 People were asking what the status of the previous charges involving Bacchus members uttering threats in Dartmouth. Well here it is… the news everyone on the East coast is buzzing about. Those uttering threat charges have now been upgraded for the benefit of a criminal organization. Three cheers. People were asking why these criminals can run around breaking the law without criminal organization charges being laid. I did say that all these crimes build a case for criminal organization and that time has come. That’s kinda what I meant when I said they weren’t very bright attracting all that heat.

Nova Scotia RCMP announced on their facebook page that as a result of an ongoing investigation from September 2012, the RCMP Combined Forces Intelligence Unit (CFIU),have laid additional charges against three members of the Bacchus Outlaw Motorcycle Gang. This is the first time Criminal Organization charges have been laid against Bacchus since they were established.

Patrick James, 45, of Dartmouth, Duane Howe, 43, from Grand Desert, and David Pearce, 38, of Dartmouth, were charged with commission of an offence for a criminal organization as well as extortion. The men will appear in Dartmouth Provincial Court on Jan. 7.

So tell me, if the Hells Angels shoot the three stooges like they did Juel Stanton, does that mean the criminal organization charges would be dropped? Please advise. Oh they wouldn’t be that dirty would they? Don’t kid yourself. It’s all about what you can do for the organization not what the organization can do for you.

CBC is reporting these criminal organization threats centre around an incident where members of Bacchus banned a person from wearing a patch from another MC. After they forced him to cut up the patch, they later banned him from attending a public MC event.

Once again this brings us to who are the Hells Angels or any other finger puppet to tell anyone what they can or cannot wear. Like the Bacchus member in PEI banning people from wearing Sons of Anarchy gear. This is about small town idiots trying to be bullies. No one likes a bully.