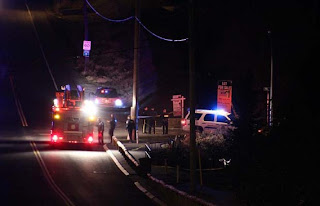 Meanwhile back on the ranch, Sunday saw three dead after two shootings in Surrey, a double murder in Hope and two dead bodies in Vanderhoof. So much for a peaceful Sabbath. There was also a man shot in downtown Vancouver Saturday morning. What do you think the odds are that these weren’t all cases of domestic violence and had something to do with using or selling drugs? Looks like we're still under a blood red sky from New Years day. The Vancouver Province is refering to yesterday as bloody Sunday. Names. We need some names people. If it's a fatality, they're supposed to release the name.

Kim bolan is reporting that the Integrated Homicide Investigation Team confirmed Monday that one of the victims, Manjot Singh Dhillon, 27, was a gangster who died in a targeted shooting.

The Vancouver Sun has learned that Dhillon once worked for the late Sukh Dhak in the Surrey drug trade, but more recently was aligned to several different crews No doubt, since the Hells Agnels are wiping the Dhure Dhak group off the face of the earth.

Freddy was also right about another shooting in Surrey on Monday night / Tuesday morning. Twenty-nine-year-old Manjinder "Manny" Hairan was shot and killed in the area of 112B Avenue and 127 Street at around 2:00 a.m., police said.