The Campbellism of Agricultural Reserves 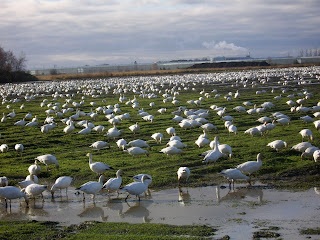 Speaking of dirty politicians and dirty developers, the Georgia Straight is highlighting that exact kind of scam on the cover of their January 17 edition. Yesterday I was speaking with a friend from Langley about the Mega Casino proposal in south Surrey. He said when he saw the proposal he was shocked it was slated for agricultural land that was protected. He said there had to have been something fishy going on getting that land converted from Agricultural to Industrial. Indeed there was and we can clearly see who was involved.

The Georgia Straight article mentions Ron Emerson, one of the Campbell Heights developers getting a sweetheart deal on agricultural land that was magically flipped into industrial zoning just like it was at Campbell Heights. This scam is legal but dishonest. It is worse than the corruption trial now under way in Montreal where developers are being accused of letting organized crime remove the biding process in a free market.

The article first expresses the valid concern of the destruction of all protected agricultural land. Many of the youth who spoke at the Surrey city council hearing on the Mega Casino project used the S word – Sustainability. Obviously, it’s hard to make massive profits in agriculture these days. Yet logic dictates where we will be if we don’t set aside some land for agriculture.

It’s not just a matter of feeding ourselves. It’s also a matter of protecting the ecosystem we live in. When you clear cut a hillside, that creates problems with flooding and mudslides. When you pave over salmon spawning streams, you eliminate another renewable resource someone else can make money off of and it sets the whole system out of balance. We all need air to breath and water to drink no matter how much money we have sitting in our bank account.

The article raises the concern about protecting one of the largest migratory bird refuges on the West coast. They mention Snow Geese and Sandpipers. We have talked about the Alaskan snowy owl in Landner and Tsawwassen. Somone else mentioned nesting Eagles. Since they are migratory and we don’t see them all year round it’s easy to forget about what the consequences are for all this natural wildlife if we remove their resting places in their migratory journey.

Aside from saving the planet, there still remains the gluttonous dirty deeds of dirty politicians working under the table with dirty developers. Sweetheart deals where special developers who contribute to specific political parties get special privileges on agricultural land and special help converting it into industrial or urban development so they can maximize their return. Why Ron Emerson even boasts on his web site that “The ability to deal with relevant issues and present them in a manner that allows the issues to receive positive recognition is a key to the success in achieving zoning and use changes.” Imagine that.

We still haven’t finished our three part series on investment fraud stealing from the public purse but this story definitely ties in with it. On page three of the online article in the Georgia Straight it goes on to explain:

“Little could Gordon Campbell have known back in 2006—when the Asia-Pacific Gateway project was conceived—that Vancouver’s Ron Emerson, president of Emerson Real Estate, would, beginning in 2010, discreetly acquire $100 million in options on 226 hectares of ALR farmland in Delta, all located in the fertile triangle between Highway 17, Deltaport Way, and the ocean.”

“The 65-hectare Felix Farms, for example, accepted Emerson’s $30-million option to sell. And he optioned sections of the 134-year-old Guichon Farm—owned, in part, by Kelly Guichon, a megamall supporter and Delta’s likely B.C. Liberal opponent to Huntington in the May 2013 provincial election—for $15 million. Offering farmers $180,000 a hectare—almost double the land’s current assessed value—Emerson intends to flip the land when pressures increase for more residential or port-related development there.”

“Little could Campbell have also known that to bring massive post-Panamax ships up the Fraser River to the impending enlarged port facilities …the Massey tunnel, the link between Richmond and Delta, would have to go.”

“So expedited engineering work is now under way to replace the old tunnel with an eight-lane, $3-billion bridge (with tolls inevitable). Once the new bridge, with all of its required land acquisitions, is built, Delta’s remaining ALR farmland will face an assault by speculators and developers who have been waiting for the chance to open up the cheap agricultural properties south of Richmond.”

This is the Campbellism of Agricultural Reserves. Just like the sweetheart deal at Campbell Heights that will eventually see the theft of $2 billion from the public purse. The BC Liberals are the largest organized crime group in the province.