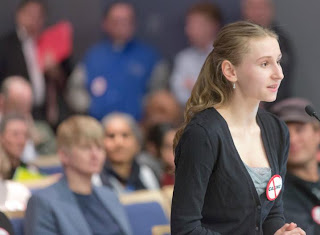 This young woman and her many stalwart friends represent the heart and soul of Surrey. She spoke in opposition to the mega casino proposal and submitted a petition on behalf of her fellow students at a nearby high school. In her speech, she nailed it. She touched many issues and in a calm sincere and heartfelt plea presented a very compelling case.

Many other youth also stood up and spoke out. One young man quoted Leonardo da Vinci who said "Nothing strengthens authority so much as silence.” He then said he was standing up to break the silence. Good for him.

I was moved and motivated by seeing so many young people make a stand for moral principles. The young lady spoke about one woman who had a $150,000 gambling debt and was found in Lynn Canyon. She had committed suicide. She raised the concern about people who commit suicide because of gambling debts and how that number is growing.

There were many young people who spoke from many different ethnic backgrounds. It was heartwarming. One activist said today is a great day to be from Surrey and you don’t hear that very often. How true. This was democracy in action. Everyone thought it was a lost cause yet so many participated and fought the good fight because they knew in their heart it was the right thing to do. I am shocked and humbled by this success. For me, it is a good day to be from Surrey.

The next question is what to do with the Bingo and the temporary slot machines in Newton. The answer is simple. There are a lot of seniors in Newton who enjoy playing bingo. It gets them out of the house and gives them something to do. That is entertainment. It’s not something that’s so addictive they are going to squander their life savings on.

Years ago I used to be involved with a group that took teenagers to volunteer at Riverview and ran a free bingo night for patients who would win chocolate bars. I remember the look of joy on one patients face when he proudfully said to me look I won a chocolate bar. It was simple and moving. It was a good thing. My own mother is in a home and volunteers come in to run a bingo night there. They chip in a couple of dollars and can win a couple of dollars in return. It is a simple form of entertainment that is not addictive and doesn’t squander huge amounts of money.

Slot machines are different. I cannot comprehend how someone can sit in front of a slot machine all day and squander their entire pay cheque yet many do. It’s hard for me to comprehend since I would find it so boring and such a waste of money. It happens because of addiction. I know a woman who lost her house and her marriage because her husband blew it on slot machines.

Rich Coleman can rot in Hell

This bullsh*t is the prime example. CEO Michael Graydon in a recent Globe and Mail article stated he’s “dumbfounded” by the decision and says, “if she truthfully had issues, I would have thought she had enough respect for Gateway to raise those issues then.” That is a very valid point and shows you clearly what was going on behind the scenes.

Diane Watts supported the project all the way until the final hour. She sat as chair which meant she didn’t have to vote. Some of her constituents flipped when they saw the overwhelming opposition to the mega casino. That made it a tie and forced her to cast a vote. If her continuants hadn’t flipped she wouldn’t of had to vote and the proposal would have been approved while she played innocent saying don’t blame me I didn’t even vote.

Dianne Watts did lead Gateway along all the way and accepted large campaign contributions from them. Michael Graydon is simply saying if she had concerns with the project out of respect for Gateway she should have raised those concerns earlier. Which is a fair comment. Voting against the democratic will of the people in Surrey is not the right solution. Yet when we look at the special deal that went on at Campbell Heights Industrial Park we see Dianne Watts true colours. Don’t fool yourself into thinking Dianne Watts is any different than Gordon Campbell or Christy Clark. They’re all one and the same.